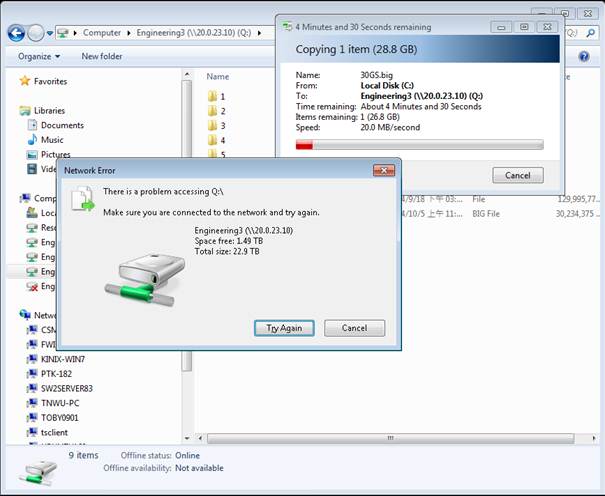 This issue might be caused by a defect of the GFS2 file system. In a clustered file system, the file locking mechanism is used when managing multiple nodes simultaneously. However, the file lock has known issues, including the following:
Red Hat documentation recommends using a smaller file system. On the Vess R2000, Share Disk of about 1TB up to 10 TB are recommended. In addition, it describes a known issue when the amount of free capacity is low. The following statement is excerpted from Red Hat user documentation:
As the documentation states, when the files system capacity is nearly used up (greater than 85% usage), allocation of available blocks slows down because more time is spent in the search process. Large files be written under these circumstances are more likely to have problems with file locking. If the file system supports the fallocate system, writing large files is more efficient since data blocks are pre-allocated, it is not necessary to use system resources to allocate blocks.

In order to replicate the problem, create several large Share Disks and fill them to 80% or greater capacity. The rate of occurrence increases as capacity usage percentage increases.

The test reports below were produced using Share Disks at 80 to 95% usage capacity. In each testing round, a 30 Gb file is copied to the Share Disks. The results are listed in the tables below. Note that ‘1’ indicates file copy completion (success), and ‘X’ indicates the copy failed.

From the above results, the following conclusions can be made:

To help determine if the problem is caused by a defect in the GFS2 file system, the same test is run using the XFS file system. The results of the comparison test are listed in the tables below.

The comparison test appears to confirm that the problem is an issue with the GFS2 file system.