Windows PCs must have media sharing enabled and media directories selected. If you are unfamiliar with media sharing setup in Windows, please see the following URL below:

Phase one of the application supports the following features:

DLNA Control Point – Create of playlist on mobile and then select external DMR (Renderer) such as Samsung DLNA TV or Windows 7 PC (or any other Renderer on the network) – Windows XP and Vista do not support DLNA Renderer. You can control playback, pause, stop, mute and volume up/down. The ability to FF and REW will come in future version.

*The difference between a DMP (Digital Media Player) and DMR (Digital Media Renderer) is the DMR can accept instructions for a “Control Point” essentially allowing the mobile device to act as a remote control over WIFI. In this case the Control Point is the Android Smartphone.

DLNA UPLOAD – DLNA Upload will only work with NAS/DMS which support the “DLNA UPLOAD” specification. Currently only Promise has DLNA 1.5 compliant Digital Media Server with DLNA UPLOAD. UPLOAD allows you to copy music, pictures and video from the mobile device to the SmartStor NAS/DMS.

DLNA DOWNLOAD – DLNA Download allows download of files from SmartStor NAS/DMS and Windows DMS to mobile device. You will be prompted to choose the download destination on your mobile device. Files must be downloaded one at time. Download queue will come in future version. 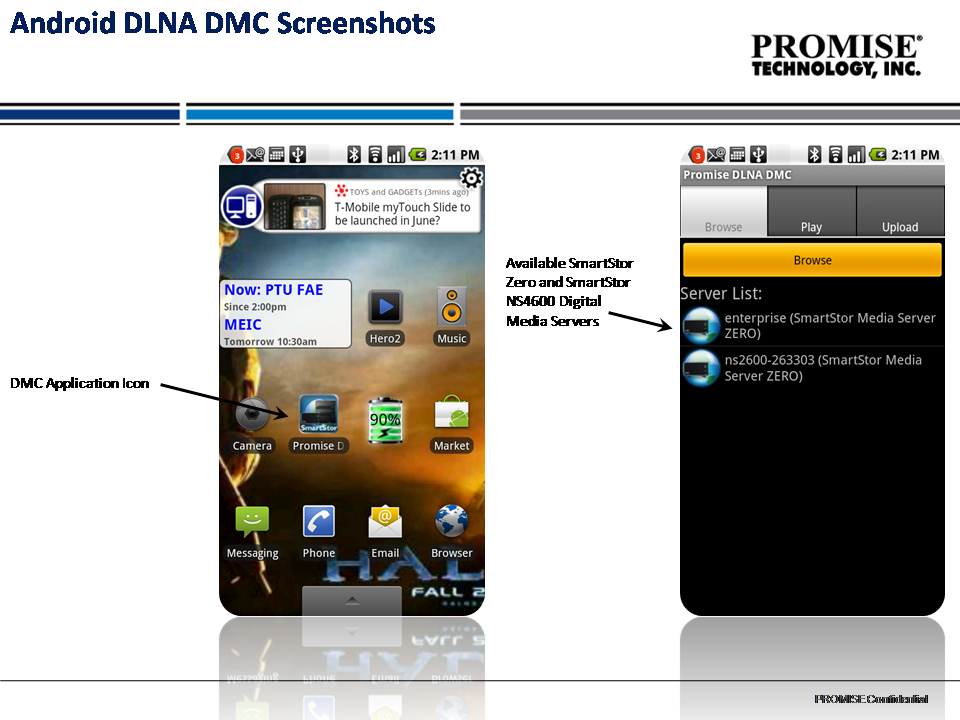 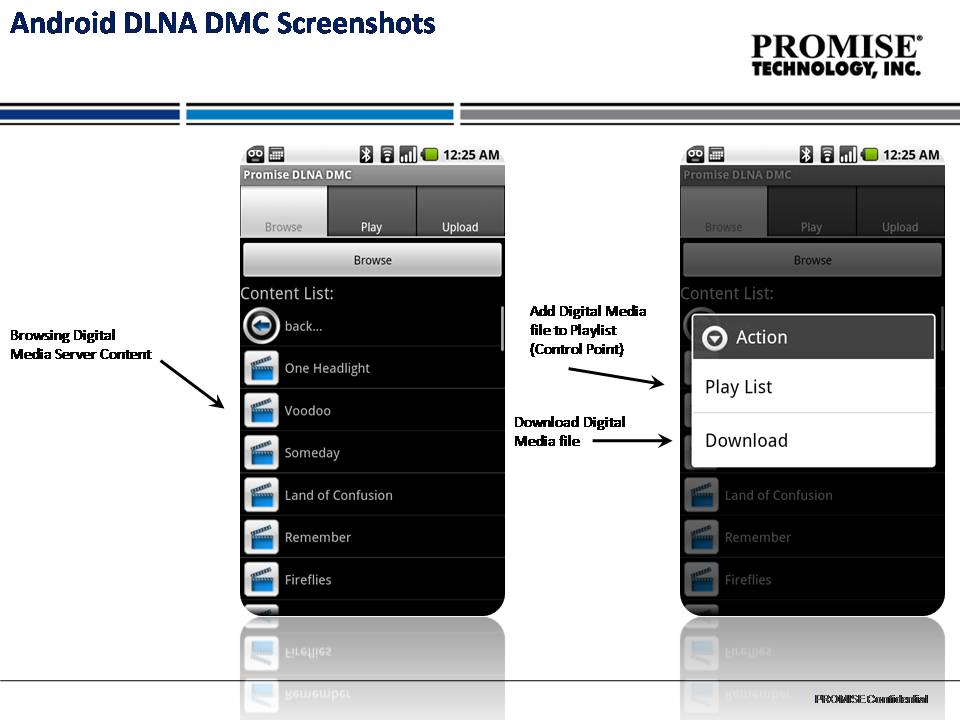 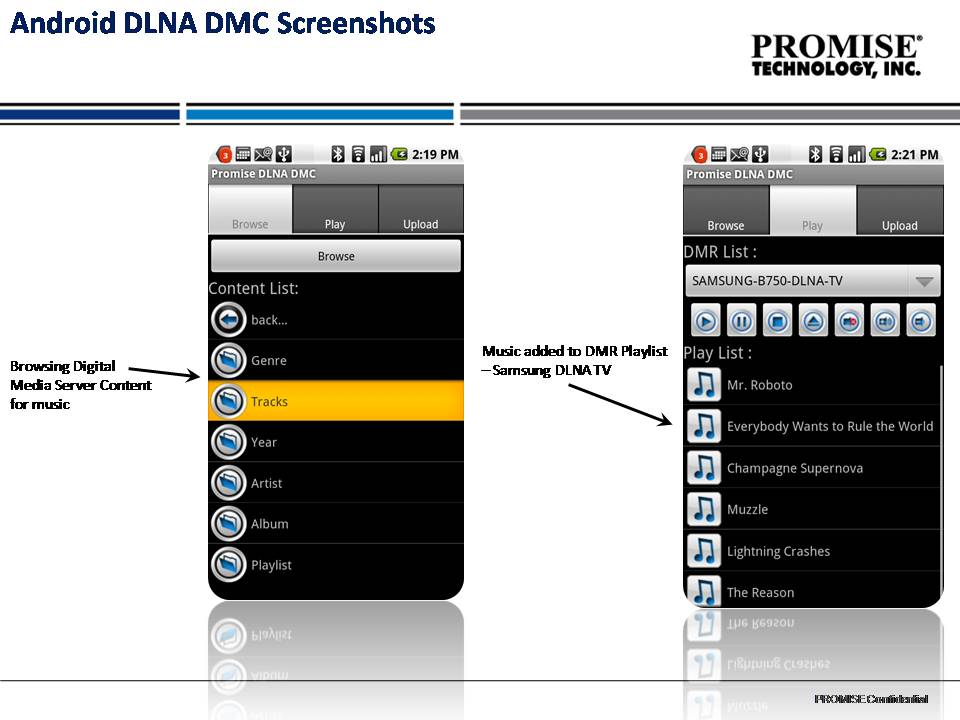 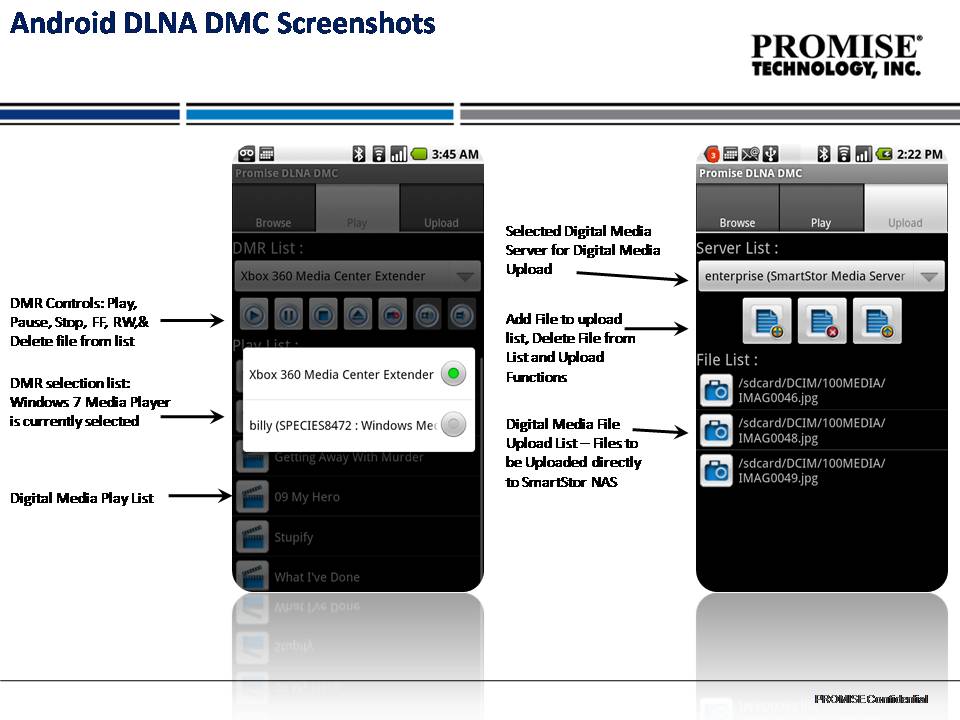 Phase Two – Phase Two of the application will arrive in early Q1 2011 and will introduce the following features:

1. Sometimes if you add media to the playlist while playback of the playlist is in progress, the newly added content will not playback requiring you to remove the content already played and pressing the play button again. We will resolve in a future version.

2. Browse button – You may find it necessary to press the Browse button more than once. This is due to resources and also issues with multicast on mobile devices. We will continually work to improve. Pressing the Browse button 2 or 3 times will result in all DMS and DMR to be discovered if you have multiple devices on the network.